After months of campaigning, The Betoota Advocate team can proudly announce that we have managed to convince the former member Independent Member for New England to visit our humble town – in celebration of the annual Betoota Races!

As a quiet supporter of both the newspaper and our under-resourced town, Mr Windsors has always promised to visit. So it’s no surprise that after months of anonymous phone calls and voice messages, we have finally convinced him to pack up his bulletproof pearlescent Range Rover and make his way to the Channel Country.

What makes this visit particularly exciting is the fact that a very excitable and possibly slightly intoxicated Tony Windsor is live-tweeting the entire road trip. Considering it is roughly a 24-hour drive from Werris Creek to Betoota, there is quite a bit to read. We have chosen the best ones for you.

In the series of tweets sent out by Mr Windsor throughout the last 24 hours, it appears he and his “squad” are indeed very ready for a few ice cold XXXX Bitters.

In what can only be described as a bold political move by the former MP, it would seem he has beaten lifelong rival Barnaby Joyce to the mark – By securing the highly influential support of the most-read independent online broadsheet in the country.

Editor-At-Large Errol Parker says it’s a simple tug-of-war in the Battle Of New England, and with whispers of a return to federal politics – it is in Mr Windsor’s best interests to butter up the reporters of Australia’s oldest newspaper.

“I don’t suspect he’ll stay for the entire weekend, the recovery day down at the Betoota Hot Springs might be a bit much for the old boy – but he’s definitely put in the work to win us over. We have campaigned for interviews with both Windsor and Joyce over the years and it seems the former is the only one interested in talking with us,”

“Ideally, we want to hold an Outback Summit – Where we put the two of them head-to-head with only Clancy and I adjudicating the thing”

But while it may seem like a political move, Tony Windsor’s friendship with the newspaper is well-documented in both bullriding and country rugby league circles – leaving many analysts to suggest this weekend away is nothing more than an old-fashioned piss up.

“There are whispers of a minority government reunion at The Betoota Hotel tonight, hopefully someone bought earplugs for when Katter starts one of his two-hour anecdotes. There’s only so much Stan Coster one man can recite,”

“We’ve got the Moreton Bay Porridge on the boil” (Bundaberg rum and curdled milk). 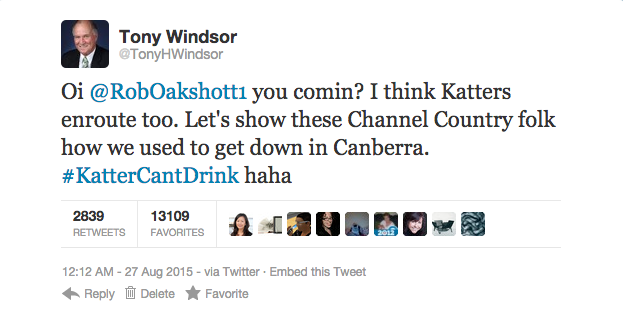 The Betoota Races is part of the Simpson Desert Racing carnival along with Birdsville and Bedourie and is held the last weekend in August. The present Club commenced in 1979 with the first race meeting held since 1962.

Anyone who is interested in making the 24-hour drive in the next 24-hours should visit their website for more details surrounding accommodation and bootmaking.