Yesterday afternoon it became evident that Barnaby Joyce Member For New England was in the running to be chosen as the next Deputy Prime Minister Of Australia.

As Australia’s oldest and favourite newspaper, as well as Australia’s most read Outback publication, we took it upon ourselves to inform Barnaby of the wants and needs of our readers.

He has since responded.

This was our open letter to Barnaby Joyce MP:

An open letter to Barnaby Joyce Member for New England:

Mr Joyce, it has come to our attention that you are within a very good shot of being chosen as the next Deputy Prime Minister of Australia.

This also means that you will become acting Prime Minister in the winter months of each year.

As we are the most-read regional newspaper in Australia, you should be very aware of the role The Betoota Advocate plays in the Australian political landscape.

In other words, we will be the ones who decide whether or not you get this gig.

After spending months talking with our readers and visiting every single CWA branch in the country, we have compiled a list of conditions that you must agree to before we can give Malcolm the go ahead.

They represent the sentiments held by our newspaper, our readers and the residents of the Australian Outback. They are as follows:

– You MUST come good on your promise for a live interview with The Betoota Advocate before April this year.

– You MUST quit smoking

– You MUST stop Malcolm from pointing at everyone with his folded, square-frame glasses.

– You MUST agree to be the only male on an entirely feminist ABC Q&A panel. Tony Jones will be replaced Clementine Ford and the entire audience will also be female.

– You MUST Stop the Mosque in Betoota

– The moment Malcolm Turnbull leaves the country, your first priority will be implementing a nation-wide ban on the AFL.

– In accordance with the wishes of our farmers, you must also sell Melbourne, and relocate all proceeds into the Department of Agriculture’s Drought Relief Assistance Scheme.

– You must be recorded using the words “South-West Queensland” at least 45 times in all media appearances over the course of 2016.

– You MUST work with the Minister of Education to allow cartwheels back into Australian Primary Schools, as well as refereed boxing.

– You MUST be able to drink an entire schooner glass of XXXX Bitter faster than Tony Abbott put away a pot of Pure Blonde.

– And lastly, you must make an appearance to the 2016 Betoota Races & Gymkhana.

Not one to be pushed around, within 24 hours, Barnaby has responded to us. With venom. 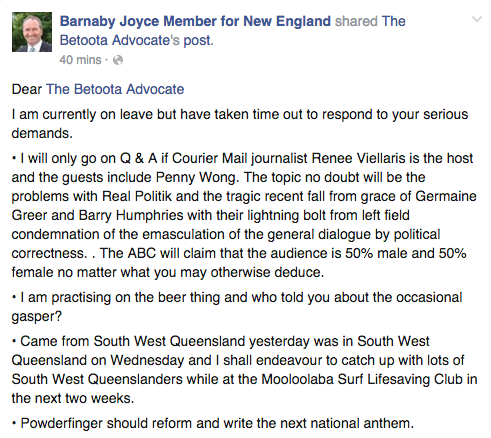 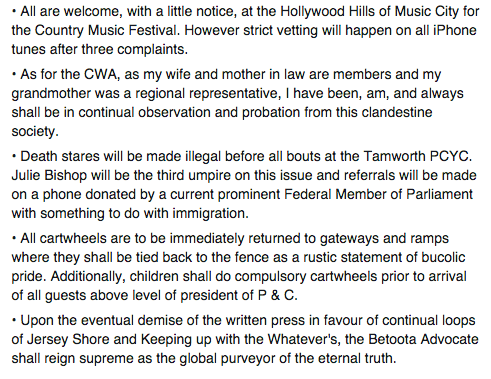 We, as a independent regional media outlet are satisfied with these responses – however, we are concerned that Mr Joyce refused to comment on the proposed AFL ban – especially after he was photographed wearing a Sydney Swans scarf while out to dinner with Malcolm Turnbull at the Watson Bay Hotel.