In a bizarre case of small-town fraud, a Bathurst resident has apparently swindled thousands of dollars from local motorists in a scam that could only be compared to something from a Roald Dahl novel.

Police have been on the hunt for a man who has reportedly been throwing a taxidermic dog under passing cars tyres in the town’s central Rocket Street.

It is believed when the driver stops and inevitably gets out to see what they have hit – the man in question walks out from a tree claiming the dog belonged to his terminally ill nephew. He then asks the driver to pay to buy a new puppy for the boy as he cannot afford one himself.

Police report they have had over 20 complaints about the offender who is described as being stocky, bald, late 20’s – early 30’s.

The alleged has since been named and shamed in this Facebook post by a man who believes he was solicited to create the “fake pet”.

The Advocates spoke to one of the would-be victims who was driving down Rocket street at approximately 9:00 PM last Wednesday night.

“…all of a sudden this bang happened like I’d hit a large rock. I got of the car and saw this dead dog lying there behind my back tyre. I was about to take off then this old sicko comes out from behind a tree demanding $500, he was talking about calling the cops so I sped off incase they wanted to swab test me,” said local resident Dylan Lucas

In an even more unusual turn of events, local Bathurst vigilantes have been spending their Saturday nights speeding up and down Rocket Street Bathurst in the hope of hitting a dog and being able to capture the perpetrator themselves.

“Yeah we’re gonna catch this dog ay! He tricked me auntie out of 300 bucks. Can’t wait till he tries to squeeze some cash outta me and the boys. Lets just say he won’t be doing it no more!”

Controversial, Sydney Taxidermist, Rodney Glen has claimed knowledge of the taxied dog, saying he stuffed the dog for a Bathurst resident a few months back. 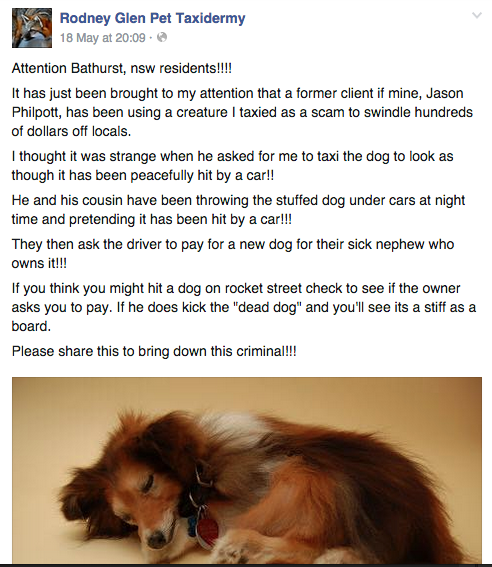 “ Yeah I remember I thought it was suspicious when he asked me to stuff the dog to look like it had been hit by a car, but we have a lot of odd requests in my business. I’m just glad my wonderful craft is being enjoyed by its owners” says Glen.

Rodney Glen goes further, stating on his Facebook page that anyone who hits a dog in their car on Rocket Street Bathurst should give the dog firm kick to see if it is genuine or not.

Police have strongly encouraged Bathurst resident to not kick any dogs that have been hit by a car but to contact them regarding any suspicious behaviour. Anyone with any information should contact Bathurst Police Station.