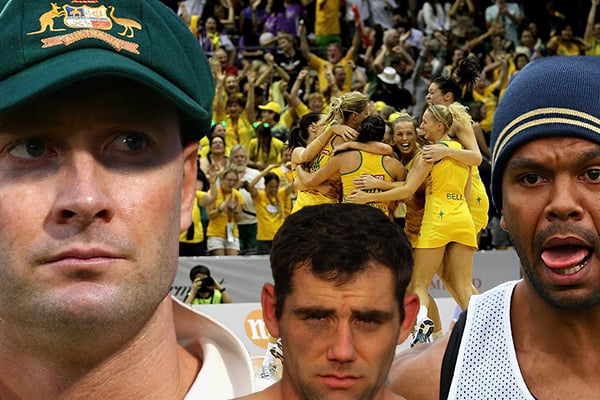 MEN’S SPORT IS in crisis after our “big three” national teams were humiliated over the weekend.

The answer to the problems don’t lie in the coaching or support staff, nor the governing bodies behind them. The problem stems from the players themselves. Misogyny is destroying men’s sport because it’s slowly becoming evident that the place of women within  these sporting codes is tokenistic.

So why do women feel the need to force themselves upon men’s sport?

Would our fore-mother’s be proud of what we’ve made of their struggles?

I’m calling out all Australian men to fight the battle against the suppression of women’s sport.

Now that developments surrounding the Kurtley Beale text message controversy have come to light, it’s clearer than ever that men need to re-evaluate and learn to respect women in sport. Take our national netball team for an example – they’re now undefeated in 13 straight internationals. If you’re a man, you probably wouldn’t have know that. I don’t blame you. It doesn’t make you a misogynist, it just makes you ignorant. You see, these women have worked hard for many years to get to the level they’re at – but men don’t care.

While men pride themselves as being able to climb the highest mountain and cross the wildest ocean, no man has been able to conquer the last frontier – to professionalise women’s sport.

Without interest, it’s nigh on impossible to monetize women’s sport.

This lack of interest falls under the dark umbrella of misogyny – if you hate netball, you must also hate your mothers, wives, girlfriends and daughters.

The back page of every newspaper in the country has been monopolised by the sagas of the male sporting universe and that needs to change if women’s sport is going to be taken seriously. The first steps we need to take in combating this issue is for editors and media owners to start taking a genuine interest. That isn’t going to be hard but it’s a whole lot easier than urinating while standing.

One proposition I put forward to the netball associations is to introduce things like being able to slam dunk in competition because that’s what will bring in male audiences. Perhaps even the introduction of three-pointers might also help. But it’s not just netball. Other women’s sport such as cricket might also benefit of rule modifications. For example, cricket. Women can’t hit the ball as far as men can so why are girls forced to play on the same ovals?

Governments need to pour more money in to building small cricket venues so the girls can appear to be as explosive as the boys. If a ground was smaller, then more sixes would be hit. The pitch should also be shorter so the illusion of speed would be heightened. Most men don’t even notice when girls make a special effort on an outfit so they wouldn’t even realise these small modifications to women’s sporting codes. Trust me.

Sadly, because men have infiltrated high up in to female sport, girls are continually oppressed by the rules and facilities bound by mens sport. Also, the opportunities afford to professional male athletes are more common that their female counterparts. This is because the media and society have marketed men as being superior in the sporting world. This is were the problem lies and this is what men need to fix if there’s going to be any future in women’s sport.

This is no exaggeration. This country was built on equality for all!

Professor Ingrid Doulton earned her PhD in women’s issues from the University of Sydney in 2012. She completed her undergraduate studies at La Trobe University in regional Victoria soon after completing high school. Immediately after, she began her Masters at The University of Canberra with her dissertation in women’s sport. She is chairwomen of the Women’s Literacy Foundation and a brand ambassador for Rexona. Prof. Doulton lives in Sydney’s upper north shore with her dog, Peter.