AUSTRALIAN BACKPACKERS ARE now twice as likely to identify themselves as Kiwis while overseas, according to a recent survey conducted in London this month.

Buoyed by the recent sporting successes and social advancements from the land of the long white cloud, swathes of young Australians are opting to bend their vowels and relax about everything as they travel around the world.

In the past, Aussie backpackers have been easy to identify. Not because of the way they talk, or by the way they deny climate change and dinosaurs – but by what they wear when they’re near any body of water. 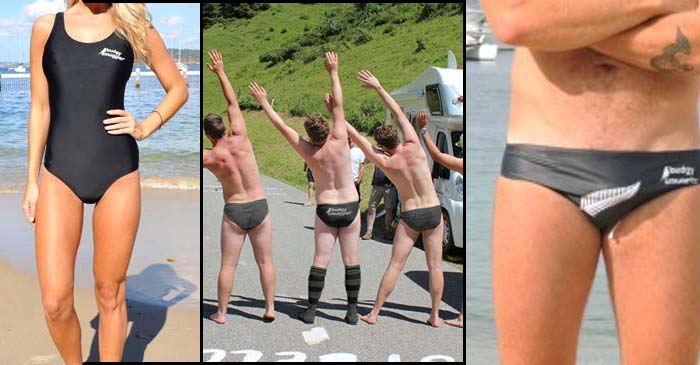 Grant Mehrtens and his mates now call themselves Kiwis if anybody asks. PHOTO: Supplied.

After the crushing defeats of the Wallabies and the Australian cricket team, regular Aussie blokes abroad have swapped out their wardrobe staple “Baggy Green Budgy Smugglers”  for something a little more fitting.

Canberra-based public servant and serial wanderluster Grant Mehrtens says he ordered a few pairs of the “Silver G Foxes” and “Ace of Spades” togs to “spare himself the embarrassment of being Australian at the moment”.

“The darker colours keep me from standing out in the crowd,” he said.

“If anybody asks me where I’m from, especially after I’ve had a few cold ones, I tell them Christchurch. It’s much easier being from New Zealand at the moment. I wore the Silver G Foxes every day of the Croatia Yacht Week,”

“When the Wallabies got flogged over the weekend, I had to cheer. I didn’t want to and it hurt me to do it – but I had to do what I had to do to survive yacht week.”

This reverse shift across the ditch is not a trend unique to Aussie blokes overseas at the moment, with the girls from Down Under also prefering to call New Zealand home for the time being.

The survey also found that young Australian women are up to twelves times more likely to identify with Lorde than any other female celebrity from Australia.

In 2007, the 18-year-old Kiwi superstar spent 11 days in Australia on a family holiday, which is roughly the same amount of time Sydney-born retail assistant Ella Darby spent on the ski slopes of New Zealand last year.

This is enough to call herself a bonafide New Zealander, says the 27-year-old – because the Australian Government has already put in motion plans to claim Lorde from 2017.

“Lorde is such a better role model than anyone Australia can bring to the table. Her style and attitude is quintessentially All Black – meticulous in preparation and flawless in execution. That’s why I ordered the “Fully All Black” swimsuit before I left for Greece last week,”

“Bikinis, like Aussies, are so overdone in Europe it’s not even funny anymore. With my new black one-piece and Kiwi accent, I’ll always stand out for the right reason. ”