It is believed that former Canberra Raiders centre, Joel Monaghan has laughed off suggestions that the currently disgraced NSW and Sydney Roosters halfback, Mitchell Pearce has “joined the club”.

Close friends have spoken up this morning and informed the Betoota Advocate that Joel Monaghan was actually quite disappointed when he viewed the footage of the disgraced Sydney Rooster co-captain pretending to root a dog, stating that “he didn’t even have a real go”.

The possibility of Mitchell Pearce being sacked by the NRL has been entertained this morning after the footballing prodigy was stood down from Roosters training when a video showing him trying to root a dog at an Australia Day houseparty aired on the Nine Network on last night.

Pearce, in a seemingly intoxicated state, can be seen in the video forcing an unwanted kiss on a female, who tries to reject his advances, before making a derogatory comment about land rights and the need for him to leave her property because she didn’t feel comfortable about having a NRL star piss his pants on her couch.

Mitchell Pearce then turns his attention to the woman’s dog, announcing: “I’ll f*** that dog, I don’t give a f***, I don’t have a sexuality.”

Posted by A Current Affair on Wednesday, 27 January 2016

The 26-year-old, who was shirtless but wearing shorts, is then seen to simulate sex with the dog, and continues when asked to stop.

The star, who is being widely criticised for his drunken attempts at bestiality has followed in the foot steps of the aforementioned, Joel Monaghan – who was actually fired for similar behaviour at the end of the 2010 season.

Monaghan was released from his contract with the Raiders at his request. His decision to leave the Raiders came after a photograph of him simulating a lewd act with a dog during Mad Monday celebrations was published on Twitter. The photograph showed Joel Monaghan trying to get a blow job off a friends dog.

When asked for comment by every single media outlet in the country, Monaghan refused, stating he has started a new life in Europe and does not want to be remembered as the “other guy that tried to fuck a dog”. 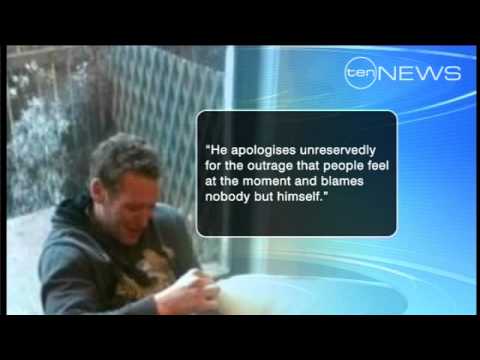 However, close friends have clarified that Monaghan found the video to be quite a let down, and that “if Pearcey was going to put it all on the line to root a dog, he should have at least had a fair crack”

While very few people are rushing to support Mitchell Pearce as he deals with not only a brutal hangover but also the possibility that he has ruined three generations of rugby league legacy, there is one man that has rushed to his defence.

Benny Benchwood, a 22-year-old product of the Sutherland Shire and what many believe to be the next big thing in rugby league, has come out in support of Pearce – stating that “these old codgers need to get of their high horse and remember what it was like when they were younger”

Much like Pearce, Benchwood was discovered at sixteen by his family club, The Cronulla Sharks. He has recently made headlines as the subject of an upcoming television series, Streets Of Sydney – and has also posted a viral online video in support of Mitchell Pearce this morning. SEE BELOW:

The ‘Cocaine Kid’ himself, Benny Benchwood, has some sage advice for Mitchell Pearce…

Posted by Streets of Sydney on Wednesday, 27 January 2016

With the NRL season only a few months off, this kind of behaviour is expected to continue across the board.