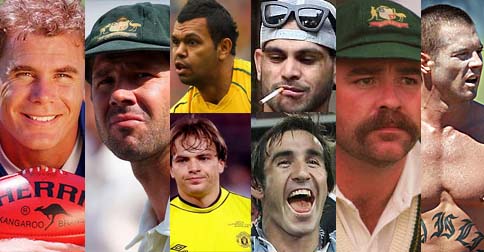 As most fans would have guessed, another year of Australian sport means another busy year for Australian police and the Australian media.

Former AFL star Ben Cousins making headlines again with his decade long struggles with addiction as well an alleged sextape/cocaine scandal ready to fly in the NRL – our greats are doing what they do best and doing what they love.

A recent CSIRO report has found that 95% of the highest-performing Australian sportsmen have one thing in common all enjoy getting fucked up.

“These blokes need to be in form. We studied ten different blokes from a range of different codes and backgrounds and found that it’s a very recurring theme,”

“Whether it’s a post-premiership mad monday, or an unneccesary bender with Darren Lockyer the night before a Waratahs game. The best of the best never seem to change. And it goes without saying that their fans love them for it.”

“In fact, that only greats that aren’t know for going on benders are the ones who avoid it for religious reasons, your El Masri’s, Sonny Bill Williams, what have you,”

David Boon, Cricket: Australian cricketing great, rocked the world when it was revealed that he drank 52 cans of heavy beer on an international flight to England. Days before he was due to meet the Queen. 52 cans of beer, at altitude, in one sitting – is a WORLD RECORD.

Ben Cousins, AFL: The prodigal son of the West Coast Eagles in the AFL, proved to be ten times more talented than anyone could have imagined when he revealed that he was leading a double-life as a Western Australian sporting hero as well as a full-blown crystal meth addict. A horrible condition that still plagues him to this day.

Kurtley Beale, Rugby: Australia Rugby Union representative, NSW Waratahs and Melbourne Rebels playmaker. Loves getting intoxicated and assaulting patrons in Brisbane nightclubs (cleared in court). One of the greatest Australian players in modern rugby union is not without his fair share of rehab.

Mark Bosnich, Soccer: One of Australia’s greatest soccer exports who played for Premier League clubs Aston Villa, Manchester United and Chelsea – is allegedly quoted as saying – “You could ski on the amount of blow I saw in the EPL.”

Todd Carney, NRL:  A true product of the tough country town of Goulburn. Drink driving, reckless driving, urinating on strangers, urinating into his own mouth… Set to make a comeback in the NRL after winning an unfair dismissal case over his sacking from the Cronulla Sharks (bubbler incident, see below)

Shane Warne, Cricket: A notoriously naughty boy. No real evidence suggests that Shane Warne enjoys getting fucked up as much as the rest. But his love of cigarettes, baked beans and women that he isn’t married to – as well as his reputation as the greatest spin-bowler of all time – makes him a fan favourite and a pub hero.

Ricky Ponting, Cricket: “Punter” captained Australia to two consecutive World Cup victories in 2003 and 2007 – as well as a decade long stint as the international test captain, Ricky Ponting has been thrown out of nightclubs from Brisbane to Mumbai – including a now infamous incident in which Ponting “had his lights punched out” at notorious Kings Cross night spot, The Bourbon in 1993.

Greg Inglis, NRL: Arguably the greatest Australian athlete of all time. Greg was pictured wearing female sunglasses and smoking a cigarette on the balcony of Dolphin bar in Surry Hills (see below) – five days into the post-grand final celebrations in 2014. The first premiership for South Sydney in 43 years.

Wayne “King” Carey: Read his book. Just… read it. You’ll particularly enjoy the chapter dedicated to his stint in a Miami holding cell after being arrested for assaulting a Florida policeman. The best Aussie Rules footballer of his time.

Professor Needham says the ‘Australian Bender’ is engrained into our national identity.

“Australians are notorious for cutting down the tall-poppies. This doesn’t work well with the fact that we are all also notorious for our love of a party…”

“When you combine those two bad habits with our love of sport, we end up with newspapers full of twenty-somethings that don’t know what is expected of them. The fact is, there are plenty more that could have been added to this list. From all codes.”

“A more interesting list would be one about sportsmen that don’t like to party. However it would require far more research.”

Whether it’s David Boon consuming what most doctors would describe as a lethal amount of alcohol while representing Australia on an international flight in an era that celebrated larikinism (1989), or whether it’s Todd Carney not fully understanding the perils of social media while he pisses into his own mouth in front of strangers.

Whether it’s a well-known AFL player reaching their third “recreational drug strike” after being spotted sniffing cocaine in a dimly-lit Melbourne nightclub, or whether it’s a Super Rugby players indiscretions being shielded by an extremely protective PR machine.

OR most commonly, the NRL throwing a troubled 19-year-old under the bus in order to “save their reputation” and in turn securing a front page write up… Australia needs to come to terms with the fact that these young men are no different to their sons and brothers.

Their sons and brothers… with six-figure salaries, surrounded by the type of women that consent to sex with multiple men in toilet cubicles.

As any old guy from the pub would say. “As long as they are playing well…”

Or “What happens on tour….”

Or, probably the most appropriate Australian sporting proverb: