Brad Hogg turns 44 in one week.

Last night he claimed the silverware back to back for his new home at the “Perth Scorchers” in the explosive Big Bash League final against Brett Lee’s Sydney 6ers… and he’s not done yet.

Hoggy wants to play right through his forties – and no one in Perth has a problem with it.

“I am ready for this. I don’t age,” says a euphoric Brad Hogg.

Of the ten other players who lined up alongside him in his Test debut, five are now firmly entrenched as television commentators, one is an ICC elite panel umpire, one is a national selector and two others run major charities. None are still playing competitively – except for Hoggy.

Hogg was not selected in the Australian Test team for another seven years – a period that spanned 78 matches and despite the fact that the T20 format was nine years away from actually being invented, it seems he was destined to carve up in the explosive 20 over model. 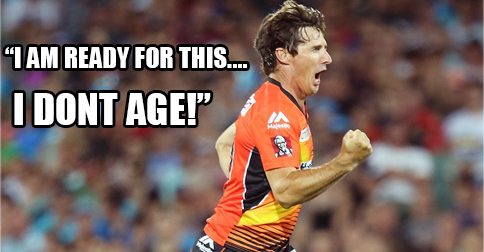 Hogg officially retired from international cricket at the Allan Border Medal ceremony seven years ago at the age of 37.

Hogg later decided to play local grade cricket in Perth. Such was his success and fitness levels, Hogg impressed state selectors enough to earn a shock call-up to the Perth Scorchers line-up in 2012. He hasn’t looked back.

Hogg is the second highest wicket-taker in the history of the Big Bash League. The veteran wrist spinner has taken 39 wickets at 18.97 from 34 matches and trails only Ben Laughlin.

An announcement after last nights win was meet with cheers throughout the Western seaboard. Hoggy is here to stay! and with no notable signs of slowing down. The Scorchers are very keen to have him there.

“I have had a wonderful career. I have played with two generations of Marsh’s… I am ready to play until I am fifty and if my performance in 2015 is anything to go by – I could probably play until I am 60!”